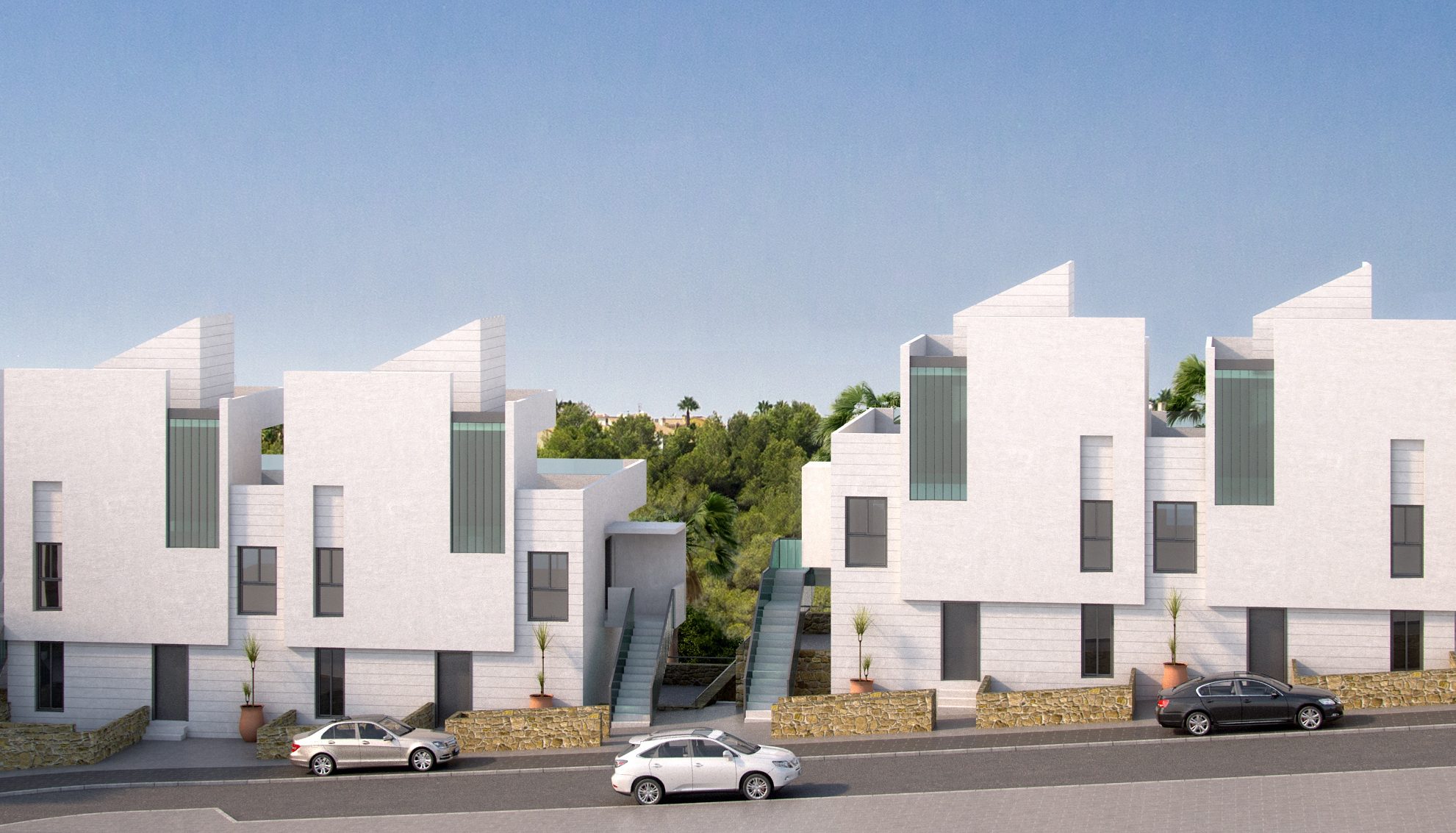 There is plenty of optimism on the Costa Blanca for the new cycle in the property sector with the coast being one of the first areas of Spain to see the re-emergence of new-build construction and now seemingly on the verge of a full recovery with prices in the coast’s best locations already rising, significant projects in the pipeline and the constant presence of a strong foreign market.

The Costa Blanca North stretches from Alicante city to Denia and is generally considered to be the more upmarket area of the coast with developments being highly sought after in locations around towns such as Altea, Jávea, Moraira and Calpe and prices in these towns being on average around €300/m2 higher than on the Costa Blanca South.

The Costa Blanca South however has been the focus of the vast majority of the new development which is currently taking place on the coast and boasts a buzzing international atmosphere as well as numerous golf courses, easy access to Alicante airport and impressive new infrastructure such as the La Zenia Boulevard shopping centre.

The Mediterranean Coast has been hit hard by the Spanish property crisis and the Costa Blanca is no exception. Graph 1 shows the price performance of 6 major Costa Blanca municipalities as well as the averages for the province of Alicante and the Valencian Community.

What stands out is that prices on the Costa Blanca are historically higher than the provincial and regional averages but price decreases on the coast have been much more severe in the crash. This is displayed even more clearly in Graph 2 where the prices are indexed and shows that all 6 of the municipalities have underperformed the province and region since 2006. 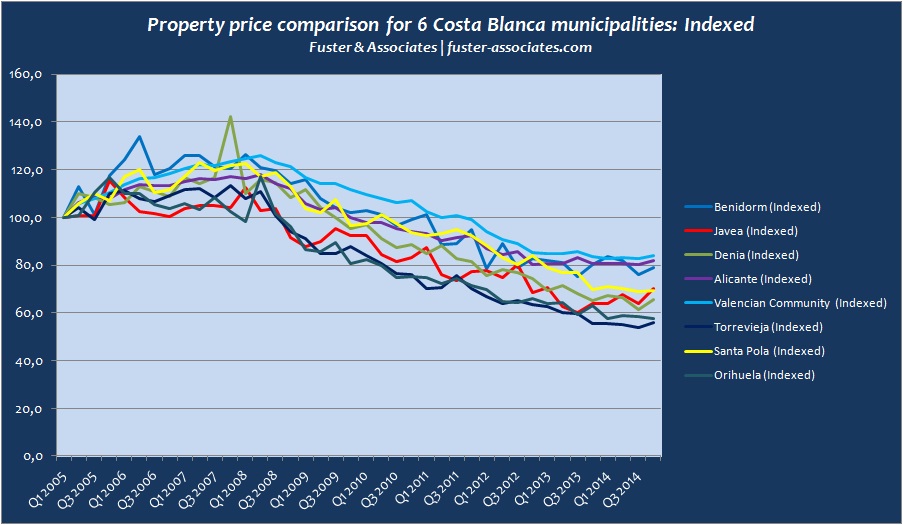 The poor performance of the Costa Blanca can be explained by the fact that it was one of the property hotspots during the boom which meant it was also one of the focal points of new build construction leading to high levels of stock and subsequently a problem with supply far outstripping demand when the crash came.

The coast is also predominantly a second home market for both Spaniards and foreigners and when an economic crisis takes hold, one of the last things which people want to buy is a second home which is usually considered as a luxury and non-essential item and was therefore discarded as a possibility for the majority of people when the crash came.

This situation is now changing and one can see in Graph 1 that prices are stabilising on the coast. In BBVA’s most recent report on the Spanish property sector the bank states that property prices in Spain’s main tourist regions are now set to rise as demand continues to increase, credit restrictions loosen and the economy recovers.

The indexed stats also reveal Torrevieja as being the worst performing of the six municipalities with prices falling to just 56% of their Q1 2006 value by the end of 2014. This is probably due to the municipality having the highest sales volume on the coast (Graph 3) which will have also meant a higher amount of supply and therefore, with the crisis strangling demand, the municipality has been more harshly affected than those trading in smaller sales volumes.

The same is true for Orihuela which has also seen prices drop dramatically to just 58% of their 2005 level. Again, looking at Graph 3 it’s evident that the municipality has a high sales volume and a further explanatory factor may be the fact that the town of Orihuela is included in the municipality which is around 15km inland and is reliant on the domestic market.

Although both municipalities have suffered badly in regards to prices, sales have rebounded more strongly than in other Costa Blanca municipalities and Orihuela in particular is benefiting greatly from the return of foreigners to the market with Orihuela Costa being an epicentre of new-build construction and demand coming from an ever more diverse range of nationalities with an offer ranging from luxury properties to bank repossessions and cheap resales.

Benidorm on the other hand has weathered the crisis relatively well with prices in Q4 2014 at 79% of their Q1 2006 level and prices during the boom peaking at around €2,900/m2, the highest peak of any of the municipalities studied. Also evident in Graph 1 is that prices per square metre in Benidorm have been consistently higher than in other municipalities.

The fact that prices in Benidorm are higher than in municipalities such as Jávea and Denia may surprise many as Benidorm has a reputation as a destination for mass, low-cost tourism. However, the city has carved out a real niche with its tourist offering and has become a location which enjoys a wide-ranging appeal with average annual occupancy rates for its hotels being 80%.

What makes it unique is primarily its striking appearance, Benidorm has the most high rise buildings per capita in the world, but also its numerous and high quality amenities for tourists such as its Blue Flag beaches, impressive nightlife and facilities for the disabled and elderly which have strengthened its allure.

A view of Benidorm’s coastline

Benidorm will also be boosted by plans for a major new shopping centre on the outskirts of the city which is set to be developed by the company Unibail-Rodamco. The plans are for a 40,000m2 shopping centre with 2,000 parking spaces at an estimated development cost of €50 million.

Although the shopping centre would be small in comparison to the 160,000m2 La Zenia Boulevard, it would go towards adding even greater variation to the amenities which Benidorm offers and would contribute to the attractiveness of Benidorm and surrounding areas as a destination which can be enjoyed all year round.

The city is also benefiting from its increasing importance as a destination for cruises with an article in El País last year claiming that Benidorm is now clashing with Alicante as it takes cruises away from the provincial capital in a bid to get a slice of Spain’s €1.2billion worth cruise tourism sector.

All these factors should put Benidorm in a prime position to take advantage of the consolidation of the recovery in the Costa Blanca’s property sector and to front a generalised recovery on the Costa Blanca North as the city’s increasing strength becomes a key part of the attraction for the surrounding area.

The evolution of sales on the Costa Blanca can be seen in Graph 3 and shows sales as actually having bottomed out very rapidly from the onset of the crisis. Sales reached their lowest point for most municipalities in Q1 2009 and have since remained stable or, in the case of Torrevieja and Orihuela, began to rise again. 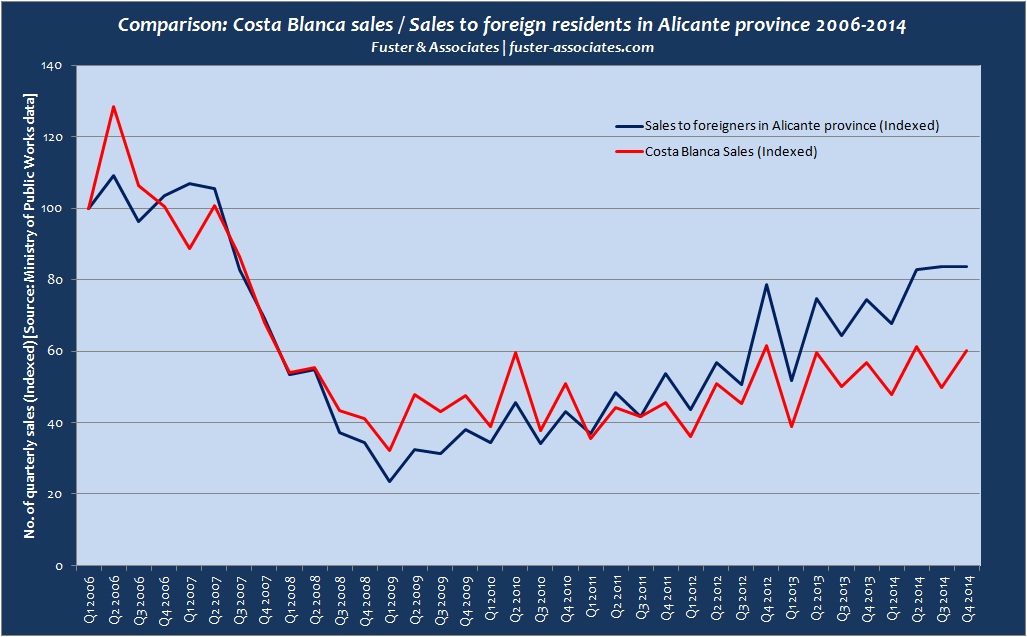 Since reaching that low point sales to foreigners have rebounded impressively and by the end of 2014 were at 84% of the Q1 2006 level clearly displaying that the foreign property sector on the Costa Blanca has successfully shaken off the effects of the crisis and is helping to make up for the lack of purchases being made by Spanish nationals.

The nationality of foreigners buying on the Costa Blanca is varied. According to an article on Fotocasa published last year, the dominant nationality on the coast were the Russians with 13.21% of purchases followed by the British with 13.08% and the Algerians with 8.91%. However, the vast majority of the total foreign market for the Costa Blanca is made up of Northern Europeans.

Russian activity has dropped considerably since last year due to the problems caused by the Ukraine conflict and the decreasing value of the rouble. The fall in the number of Russian buyers has been more than offset by the British market though, as the strength of Sterling against the Euro makes Spanish property cheaper and the British economy continues to grow.

Graph 5 shows the evolution of the average price paid by foreign residents for properties in Alicante province from 2006 to 2014 and what is noticeable is that while prices paid for resales have declined rapidly, prices paid for new-build properties have held up surprisingly well and in Q4 2014 were at an average of €177,939.60, just 14.3% below the peak of €207,696.4. 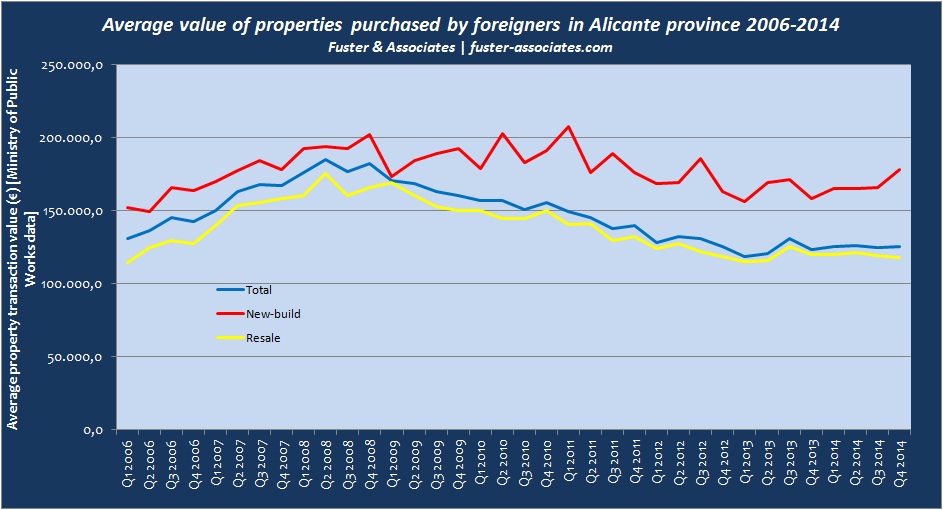 Graph 5: Value of properties purchased by foreign residents in Alicante province by type 2006-2014

So why have transaction values on new-build properties remained so high? The main reason is that new-build property sales have plummeted on the Costa Blanca due to the crisis, this is evident in Graph 6. The new-build developments which are now being sold are of a higher quality and are therefore being sold at prices which are more expensive, in relative terms, than during the boom. 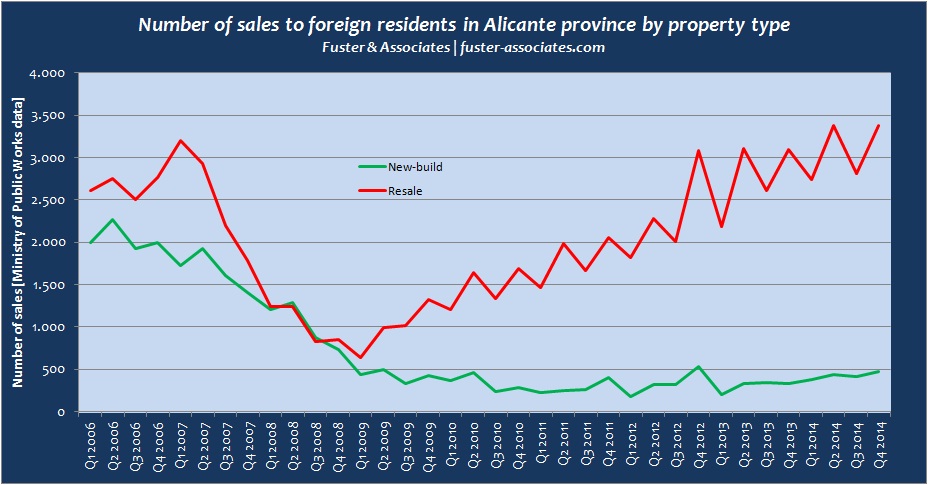 This is most evident in Orihuela Costa where numerous new developments have sprung up over the years since the boom. The new properties have more modern designs, better technical specifications and superior build quality to much of the stock that was available during the boom years and their prices are now starting to increase as demand rises.

It will also be hoped that the city of Alicante invests more heavily in infrastructure and marketing. The importance of a strong provincial capital can be seen in Malaga which is now used as one of the selling points for the Costa del Sol while a recent Daily Mail article even went as far to say that it may be the new Barcelona.

Alicante does have a lot to offer with numerous museums including the Museum of Contemporary Art, the Museum of Alicante and the Provincial Archaeological Museum which was named the best museum in Europe in 2004. Add to this the city’s beaches, parks, historic buildings and markets and it becomes clear that Alicante is not doing enough to promote itself.

A project which is set to be launched imminently in Alicante is the development of a new Ikea on the outskirts of the city in the district of Las Lagunas de Rabasa. The Ikea will be accompanied by a shopping centre and the total area of the development is set to be around 300,000m2 and will be another selling point if finally approved.

Forecasts are positive with sales increases expected to continue and predictions that price rises in prime areas of the coast will gain pace with more generalised price increases also becoming evident.  While new-build construction should continue to hold-up, refurbishment and renovation of existing properties are also set to play an important role in the new cycle.

The Costa Blanca is certainly emerging stronger from the crisis with the more sustainable new-build construction model, important new infrastructure, a vastly improved planning framework, a more professionalised property sector and the factors which originally made it so attractive: the sun, sea and high quality lifestyle.