The IRPH mortgage could be considered abusive and opaque according to the Advocate General of the Court of Justice of the EU.

According to Mr Maciej Szpunar, the IRPH mortgage could have been commercialised in an abusive way and it will be up to our judges to decide on a case-by-case basis whether transparency was applied when users contracted a mortgage with that index.

What the advocate general is saying in his conclusions is that the fact that the IRPH is an official index does not necessarily make it transparent, in fact he believes that the calculation formula used by the financial sector can be too complex for the average consumer.

That is why he states that its validity has to be subject to the client being duly informed of the consequences of referencing his/her mortgage with this indicator. That’s the key, Mr Szpunar insists – whether the mortgage was commercialised correctly or not.

The information that the professional must provide to the consumer to comply – in accordance with article 4, paragraph 2, and article 5 of Directive 93/13, the requirement of transparency of a contractual clause that sets an interest rate using as reference value a legal reference index such as the mortgage interest rate index (IRPH), the mathematical calculation formula of which is complex and not very transparent for an average consumer should:

– on the one hand, be sufficient for the consumer to make a prudent decision and with full knowledge of the cause as regards the method of calculation of the interest rate applicable to the mortgage loan contracted and the elements that compose it, specifying no only the complete definition of the reference index used by this method of calculation, but also the provisions of the relevant national regulations that determine said index, and,

– on the other hand, refer to the past evolution of the chosen index.

It is up to a national judge – when checking the transparency of the contested clause – to verify taking into account the set of circumstances surrounding the conclusion of the contract, on the one hand, if the contract transparently exposes the method used to calculate the type of interest so that the consumer was able to assess, based on precise and intelligible criteria, the economic consequences derived from it and, on the other hand, if this contract complies with all the information obligations provided for by national law.

It is important to understand that these comments are not binding, but in 80% of the cases the Court rules the same way so that those affected by the IRPH can certainly hope that the sentence would be final and that consequently these mortgages could be cancelled and the banks would have to compensate those affected.

We are awaiting the ruling of the European Supreme Court of Justice which we anticipate for the second quarter of 2020.

The IRPH or Mortgage Interest Rate Index was created long ago, in a 1994 ministerial order, and it is therefore an official index recognised by the Bank of Spain.

This is the second most used indicator in loans used to purchase homes in Spain, second only to the Euribor, the calculation of which is linked to loans between banks.

The mortgages referenced to this index have a very high interest rate which is not easy to calculate.

First, all entities make a weighted average of the interest rate they are applying to their mortgage operations in 3 years.

Upon receiving that information from all entities, the Bank of Spain calculates a 2nd statistical average which is a much simpler calculation.

The commercialisation by the banks of this index it is now suspected to have lacked transparency.

The cause was taken to Europe after the Spanish Supreme Tribunal did not consider it to be abusive.

Why the IRPH and not the Euribor?

The Spanish IRPH mortgage was considered less volatile and more stable. It was mostly used by savings banks during the years of the Spanish housing bubble between 2007 and 2008.

The problem is that historically, the Spanish IRPH mortgage has always been higher than the Euribor, and that difference has been accentuated in recent years.

For instance, recently the Euribor has been in negative while the IRPH in July 2019 was at 1.84% and that represents a lot of extra money when paying a monthly mortgage.

How do I know if I have IRPH in my Spanish mortgage?

If you are paying a mortgage and you are not sure if you have an Spanish IRPH mortgage in your contract or not, the first thing you should do is to look at the type of reference in the mortgage deed.

Typically, it appears in the third clause. IRPH should be clearly mentioned, the acronym appears and what each letter means, but there is no further explanation.

How much would I have paid on average with the IRPH?

That is a sizeable amount!

What do I do if my Spanish mortgage uses the IRPH?

If you do indeed have the IRPH applied to your mortgage, it is still too early to claim or to initiate any legal action because, until the CJEU pronounces its decision and the limits of the claims are established, the process is still up in the air.

We recommend not accepting any type of agreement nor signing any document because if you do accept a proposal from a financial institution you might be giving up the possibility of taking legal action.

What do I do if the bank calls me to negotiate my IRPH mortgage?

The banks will probably begin to call clients with an IRPH mortgage to offer them a pact in which they change the type of interest rate, as it has already happened with other banking products.

We recommend not signing anything that has not been understood and carefully read and to get advice on the entity’s proposal from a professional.

Beware because it is fairly common for banks to include some clause in these negotiations by which the client renounces to take subsequent legal actions once s/he has accepted the new requirements.

We can only wait for the ruling of the European Supreme Court of Justice which we anticipate for the second quarter of 2020.

However, if you think you are paying too much in your Spanish IRPH mortgage, don’t hesitate to contact us.

The key to this matter is the lack of transparency used when including the IRPH clause.

Once the European justice supports us, we will ask it to be cancelled or, failing that, that the loan be converted to the Euribor and the additional repayments be paid back to our clients.

We will keep you posted! 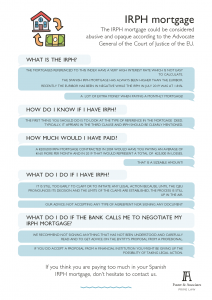 The countdown begins to claim off plan properties that were never-handed over.

Your Email has been hacked – What can you do? 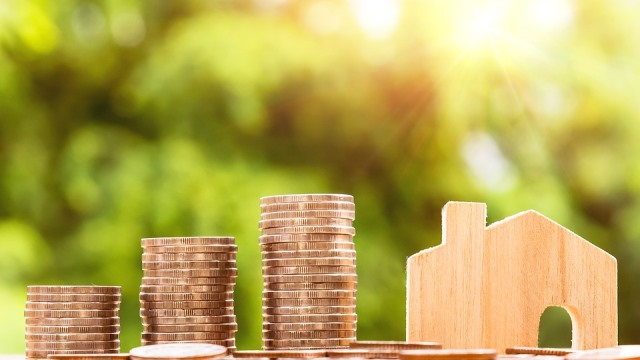 Should I claim the Mortage Stamp Duty in Spain or should I not?